I walked across the stage of a Baptist mega-church fondly referred to as Six Flags over Jesus. This stroll was not for religious purposes, though. It was my high school commencement ceremony.

Having engaged in a celebratory blunt beforehand with a gaggle of fellow seniors, I vividly remember the ritual feeling surreal. The importance of this day was all but lost on me, and I honestly expected to feel like a “grown up” after I shifted my hat’s tassel. Today, at age 29 I’m still waiting on that feeling.

Mr. Joseph Crymes, a homeless white male in Atlanta, has a brief sit down with Dstructive. Crymes truly has it rough.

Adulthood isn’t something that I transitioned into quickly. In fact, I’m still not fully there (see: nowhere close). If there were a mountain with a peak that represents adulthood, I’d say I fell about halfway up, died, and now rest in an awkward man child purgatory that is most unsatisfying. Not only am I unsatisfied, but my family and peers seem to share the sentiment.

“Don’t say that, Sport! All it takes is a little hard work. Buckle down, stay focused, and give it some time.”

This advice or any of several variations have been fed to me in times when I was in despair or depression. After being in the same shit situation for so long, I’ve realized that I only learn the hard way.

I’ve always had to lose everything, go to jail, or completely fuck up a relationship to check myself and say, “Hey, that was definitely a bad idea.” I have learned I am resilient and always calm in emergency situations, though. I suppose your first time in hell is always hot. The second, third, fourth, and proceeding times, you learn to wear shorts and bring bottled water. 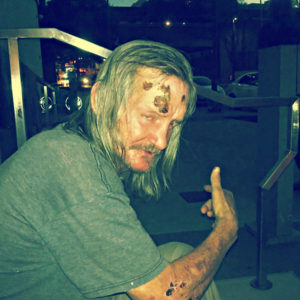 Now, as for how this relates to music: take my advice and don’t learn the hard way. Stay focused. Stay true to yourself. DON’T GIVE UP. You only truly fail when you give up. If you’re serious about music and being a pro artist, you have to make sacrifices daily. Stay in and write, record, or make that beat when your friends are partying. You should only be at a party to promote! Music has to be your LIFE, your reason to breathe if you want to succeed in this overcrowded industry. Always keep in mind that there are millions of people that want to be a musician and only a few open spots.

As I wrote this, I met a man named Joseph Crymes. He, too, has always had to learn the hard way. He was kicked out of his parent’s home at 17 for throwing a keg party, and since then it seems to have all gone down hill. He is now a disheveled homeless alcoholic; the kind of guy you see in any big city that probably scares the bejesus out of you.

Mr. Crymes definitely isn’t a man most people would engage with based on looks alone. How did he get here? It doesn’t happen all at once. A skyscraper is built one floor at a time. One brick at a time. So keep in mind that each choice you make is like a brick. Do you want to build a tower of despair or triumph? BE TRIUMPHANT!!! Take my advice and all good advice. Don’t learn the hard way…