CD Baby is a scam and a major tumor on the independent music industry.

In this article, you’ll learn why you should never use CD Baby to market or sell your music as an independent artist.

UPDATE (06/29/17): CD Baby files another copyright strike against my free Zanderjaz instrumental compilation video on YouTube immediately after I uploaded it. After some digging, I come to find out that “Big Rob,” a rapper, has used one of my beats that I give away for free and is selling it on Amazon. CD Baby strikes again! Cock suckers!

UPDATE (02/16/17): I have won my copyright dispute against CD Baby and their ads have been removed from my video. If you feel you’ve been wronged by CD Baby, I recommend disputing their claims.

Today I received an unexpected email from YouTube and it tells me that I’ve had a copyright claim filed against a video I uploaded in January of 2012. The video is my own original content from an attempt at a dubstep album which I released in January of 2012. I made this instrumental myself and it has been online for almost five years now. The copyright claim was randomly filed by none other than CD Baby. Before I get this rant started, I want to tell Tracy Maddux (CEO of CDBaby.cum) that he should go sit on a cactus. I was quite shocked at this copyright claim because I didn’t think I stole anyone’s original creation for this instrumental I made. Please view the copyright notice email screenshot below. 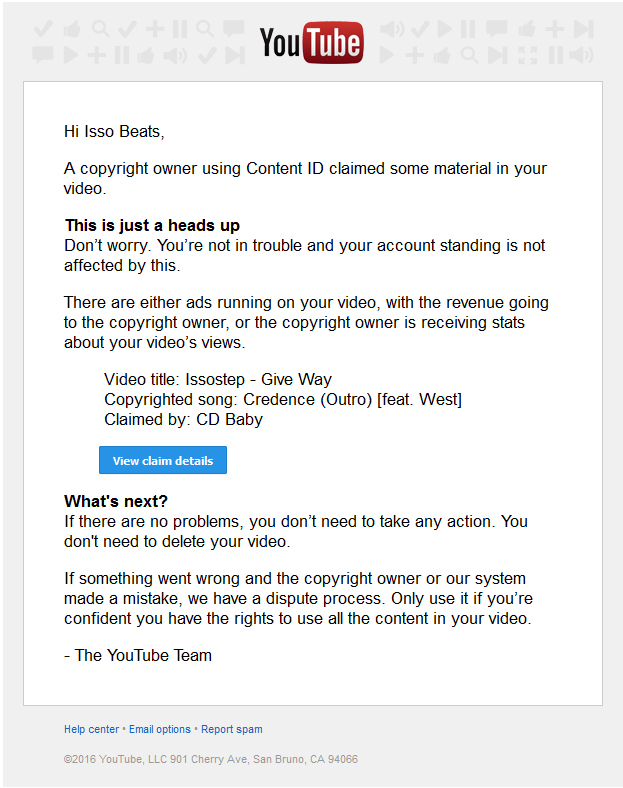 It just so happens that I used copyrighted material which someone else created before me! Dang! I try my best not to do this, but I guess it even happens to the most thorough of artists. I found the artist whose music I stole. It appears I stole an instrumental that “Mike Jack” created in 2015 and used for his album which he sells on CD Baby and Amazon. Apparently, I traveled back in time three years from Mike Jack’s album release date into 2012 and uploaded my video on Jan 24, 2012 at 5:32 PM. Note to buyers: if you contact me via email, I can hook you up with a solid deal for my working time traveling machine, however, CD Baby need not apply for this exclusive reader only offer. 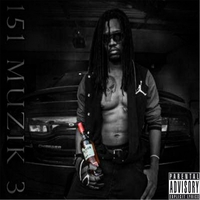 Click the play button below to hear Mike Jack’s “Credence” song which I allegedly stole from him.

Below is a screenshot of the instrumental CD Baby claims I stole from Mike Jack. You can view the actual album page here (which I won’t link, because screw CD Baby) http://www.cdbaby.com/cd/mikejack1 but you don’t need to go there to listen to the song because I ripped the entire song from their website so I could compare it with my time traveled upload to YouTube in 2012. If you didn’t know already, I have mad tech skills, possibly more than Tracy Maddux, the CEO of CD Gayby, whoops, I meant to say CD Baby.

Yes, the song I allegedly stole from Mike “The Beat Jacker” Jack is on YouTube. Needless to say, I was a pretty thorough time traveler and covered my angles. Unfortunately, CD Baby’s (or YouTube’s) copyright content detection algorithms are second to none and caught me red handed nearly five years into the future from 2012. You’re doing a swell job running that baby of yours, Tracy Maddux!

If you listen closely to Mike Jack’s song, “Credence,” you can hear these weirdly placed slight vocal tags that sound like a female saying “www.IssoProductions.com” in the background. That sure is weird, isn’t it? Why would a self-proclaimed dope emcee named Mike Jack, who can frequently be spotted yacht surfing and banging whores, insert subliminal voice tags reading out a website address which links back to my old website? That IS SO weird.

It just so happens that IssoProductions.com was my previous website before it got hacked by a good for nothing Saudi Arabian, redundant, I know… I’m still confused how Mike Jack obtained my sister to record an Isso Productions vocal tag to put on his originally produced music which I allegedly stole from him, according to CD Baby.

Wait a second, maybe my time traveling machine never existed, and maybe Mike Jack actually “jacked” this instrumental from me without notifying me, giving me credit, or anything of that sort. Come to think of it, Mike Jack’s name is pretty fitting. He’s a beat jacker. What if… Just what if CD Baby isn’t actually looking out for independent musicians as they claim to be? Now that might be a conspiracy. Surely, Tracy Maddux isn’t in the music business for the money because he loves the craft and loves helping independent artists all over the world.

CD Baby just so happened to file their copyright claim against my nearly five year old video today even though it only has about 80 views. I’m not worried about the money, but I’m worried about the origins and motives of CD Baby’s actions against me and many other independent artists. CD Baby resorts to filing copyright claims on any video their automatic detection scripts can match up with content uploaded to their website without verifying to be 100% sure that it is actually a legitimate copyright claim. Instead of taking the few minutes of time for researching a copyright claim, CD Baby just moves forward with hundreds of copyright claims and just let’s you dispute the claim while they display monetized advertisements on your potentially 100% original production (like my video).

So, CD Baby and Tracy Maddux, what do you have to say for yourselves? This isn’t the first time someone has stolen my music, and I’m not even upset about Mike Jack jacking my beat, that’s not even surprising to me. The thing I’m irked about is CD Baby’s false copyright claims against a lot of people including myself. CD Baby claims to be all about supporting independent musicians, however, CD Baby stoops to levels so low as to jacking advertisement space on videos which originate from independent artists even when the videos only receive a miniscule amount of views. CD Baby’s false copyright claims are disgraceful to independent musicians and the operators of CD Baby should be ashamed of themselves. From here on out, CD Baby is a well-known joke to me.

To provide additional proof of CD Baby’s antics, I have embedded several videos from YouTube below from other people who have experienced false copyright claims from CD Baby. I wonder, does CD Baby have to stoop so low and insert ads on everyone’s videos because their service actually sucks farts out of gaping rectums? I would personally never recommend using CD Baby. If you’re going to be an independent musician, don’t rely on other people to get your work done. CD Baby is a joke and will do anything to make a few extra bucks. Some of the videos below were actually recorded recently, so have fun learning why CD Baby is a giant, hot, steaming piece of shit. Here are the videos… P.S. – CD Baby sucks.